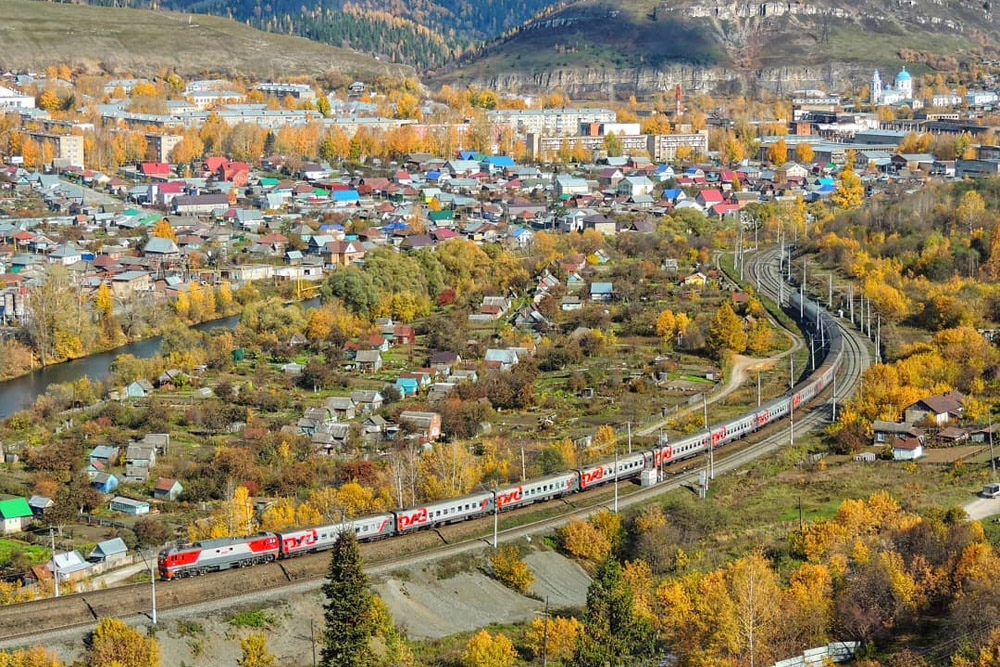 The Trans-Siberian express is a journey through Russian geography, history, ethnography which you can experience not from books or legends but by your own eyes. Trans-Siberian train carriage will become your key to a real russian adventure. In this adventure you'll ride through hundreds of small villages and industrial towns, spend a few days in the Russian capital, make stops in a dozen of most interesting Russian cities and, of course, enjoy the genuine Russian nature (lake Baikal, Altai mountains, Far East). read more...
Russia is so big and its sights are so many that it was very difficult to gather them in one tour. But we did. So, above you'll find two Trans-Siberian routes (the first is for summer, the second for winter.)
Our tours have a few differences from the average "classic" tour: 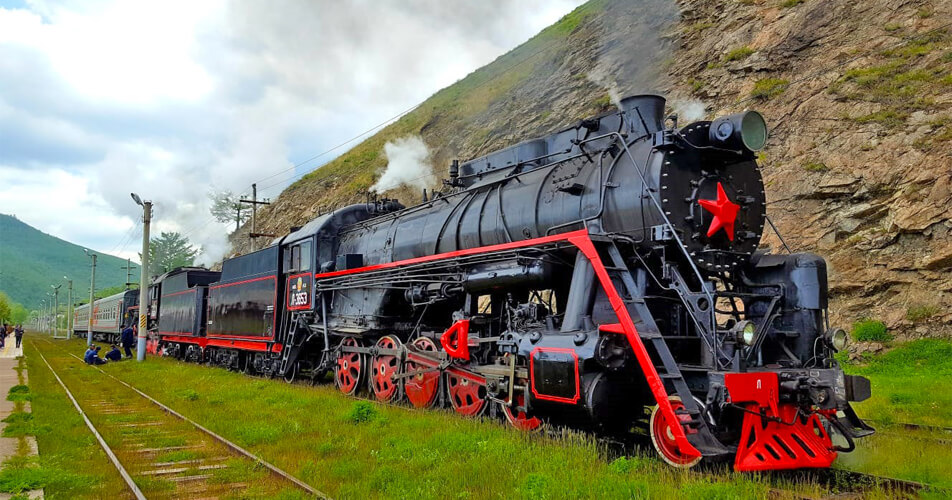 The Trans-Mongolian Railway (officially, the Ulaanbaatar Railway) is a modern Silk Road that began to function in the middle of XX century. The road connected three capital cities: Moscow (Russia), Ulaanbaatar (Mongolia), and Beijing (China).
During the tour, you'll pass through the European and Asian parts of Russia, Siberia forests, grassy steppes, and the Gobi desert of Mongolia.
The railway part of the tour takes 7 621 kilometers and 6 full nights. 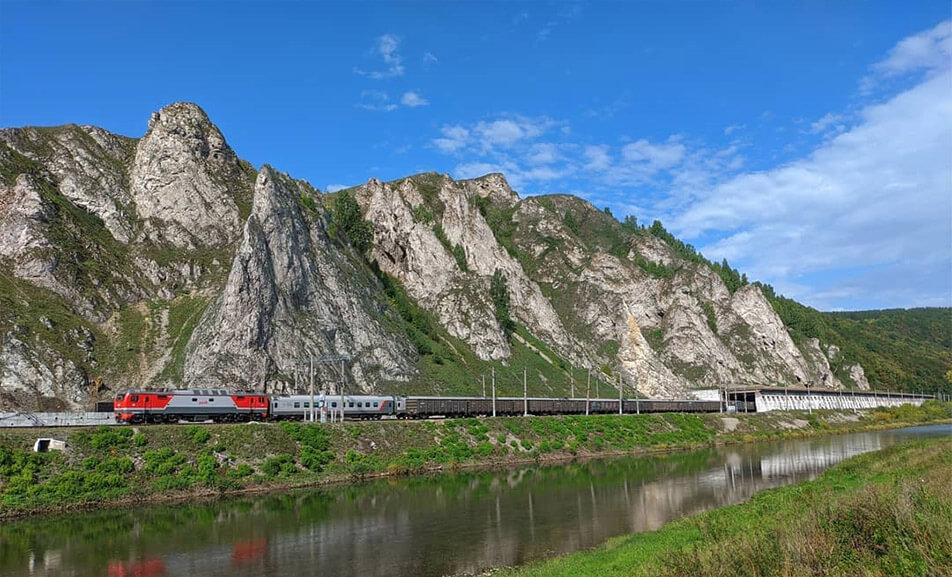 The Trans-Siberian Railway passes through 87 cities (14 of them are regional centers) and through the territory of two parts of the world:

We can't tell you about all Trans-Siberian cities, so we chose the most perceptible.
Learn more about Russian cities and join our tour! 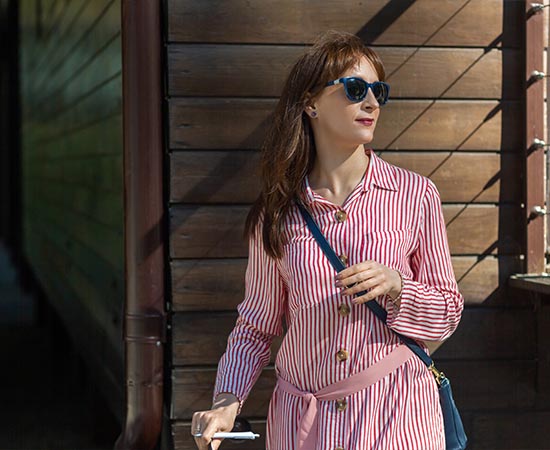 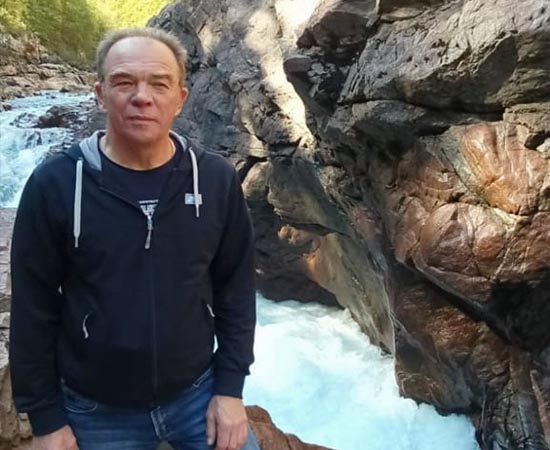 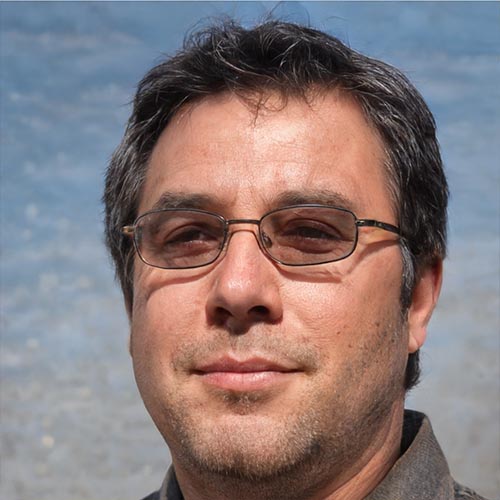 One of the main reasons for how successful the holiday was, apart from the excellent itinerary, was the helpfulness of tour guides.
I loved all the train rides, cities guiding and nature experience. completely 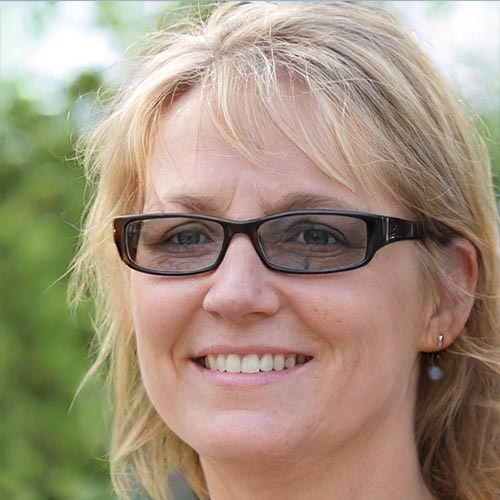 Spectacular steam train ride! A must do for the train enthusiast and outdoor lover!
The Russian people were extremely friendly throughout. completely 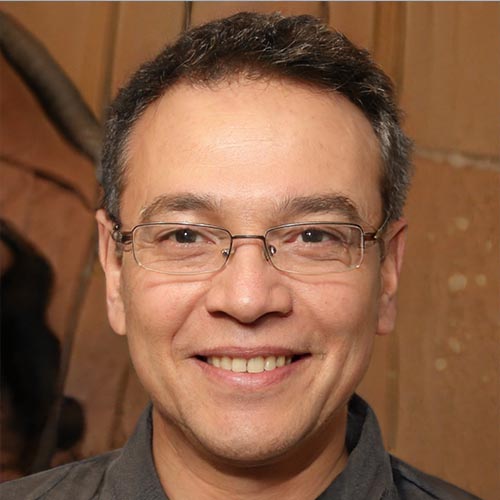 I want to thank all staff I encountered on a recent trip from Moscow to Vladivostok in August 2015. The staff at all points were courteous and very helpful. completely 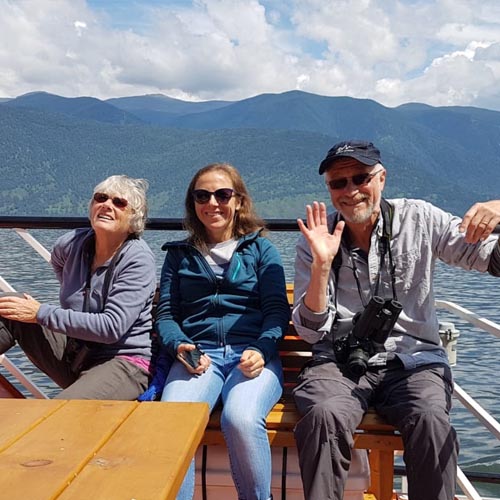 Our 20 day trip to Russia was phenomenal! Artem did an amazing job curating our trip with a special overnight in yurt. It was the highlight of our trip! Artem also arranged meeting with a real shaman. completely 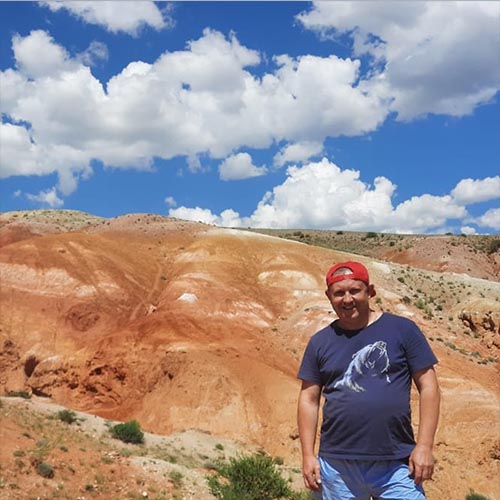 My wife and I had the most amazing time traveling around Trans-Siberian this was very easily the best trip we've ever taken. We got to see some amazing sights, untouched beauty, and explore Russia in a way that its meant to be. completely 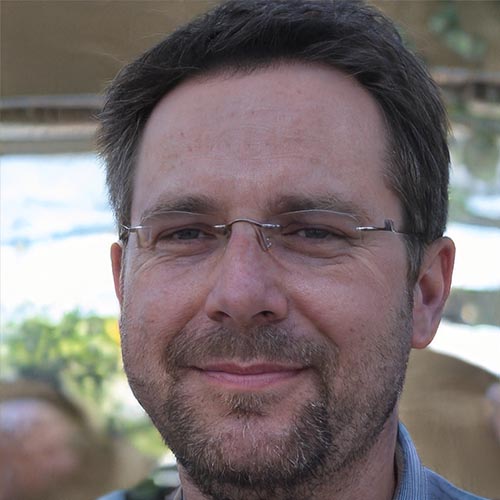 I just want to say a huge thank you...for making our anniversary possible, it really was the trip of a lifetime and no photos can do it justice on the experiences we enjoyed. completely 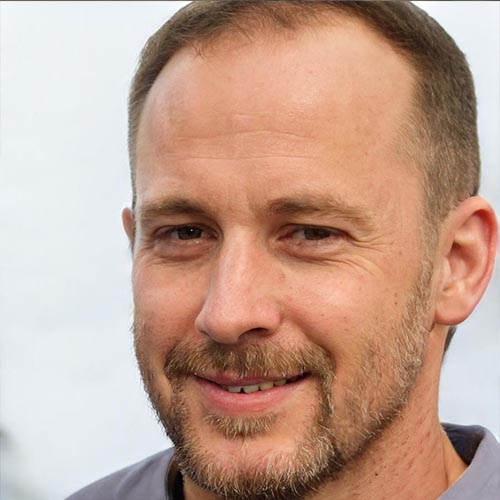 I have recently returned from the 19 day Trans-Siberian tour and I cannot recommend it highly enough. The service provided by Altai Touristic was first class from the minute I enquired about the tour on-line... completely 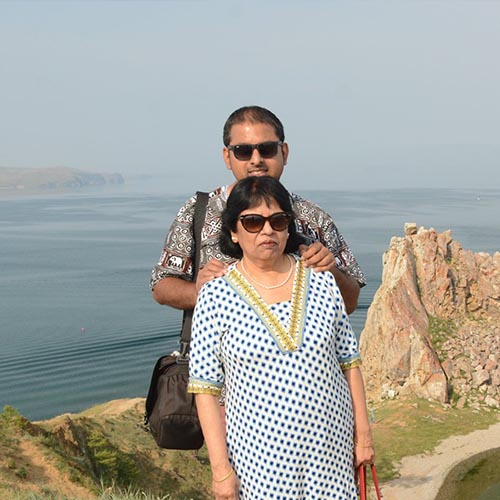 I wanted to express my appreciation for the staff of Altai Touristic for making our Trans-Siberian rail trip a great success.
We loved the beautiful scenery of each of the cities and towns we visited. And the weather cooperated. God blessed us! completely 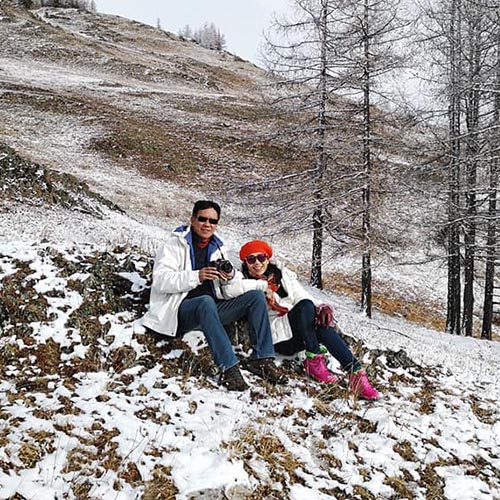 We had a wonderful vacation on our "Winter Trans-Siberian holidays" tour in Russia. We traveled by train and car. Everyone we had dealings with were very professional and helpful. completely 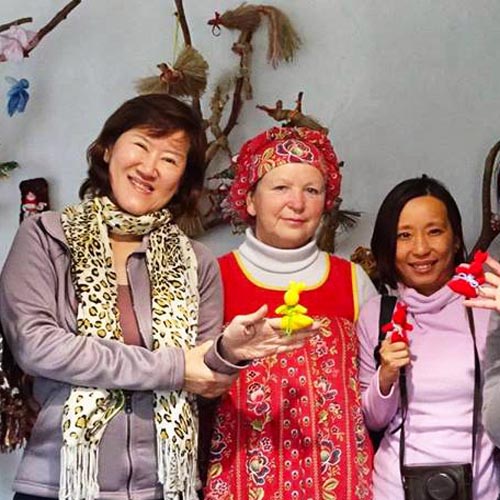 Types of railway carriages on the Trans-Siberian railway

Let's blast through a list of different types of carriages available on the Trans-Siberian railroad.

Premium carriages usually have up to six compartments with two beds in each. There is also a sink, and in some cases, a toilet and a shower cabin in the compartment. If not, you’ll find them at the end of the carriage. Note that whether you intend to travel alone or with someone, the premium carriage ticket price will be the same, as it includes the entire compartment.

First-class carriages, also known as Suite or SV, contain nine compartments, with two beds in each. You’ll find toilets at the beginning and the end of the carriage.
Unlike in premium class, tickets to SV wagons can be bought for each person individually. This type of wagon is particularly popular with couples who want to enjoy their time on the road just the two of them. Overall, the carriage can accommodate up to 18 people.

Compartment carriages accommodate up to 36 people, with 9 compartments and up to 4 people in each. There are two upper beds and two lower beds, and a table between them. The toilet is located at the beginning and at the end of the carriage. Compartments fall into three categories: male, female and mixed.
This is one of the most popular options for tourists who want to enjoy the trip with comfort without overpaying. Note that many trains on the Trans-Siberian route don’t offer Suite (SV) carriages, but couples who want to travel separately from others can book an entire compartment (all four beds).

Unlike other wagons, the open carriage doesn’t have doors in compartments, and each compartment contains six beds (the extra two are “in the corridor”), with up to 54 travelers in a carriage. You can find toilets located at the beginning and the end of the wagon.
Such wagons may be noisy, smelly, and sometimes too hot. You’ll also need to keep an eye on your belongings. On the upside, the price is much cheaper than in other carriages.

Another train type is the high-speed train, such as Sapsan, that operates between Moscow and St Petersburg. It goes up to 250 km/h, so the journey takes under four hours.
There are four types of carriages: 1st class with leather seats and a meal included, 2nd class with leather seats, economy class and the bistro wagon.
However, such trains don’t operate on the Trans-Siberain railroad just yet, so more on that the next time.

Luxury trains operating on the Trans-Siberian offer first-class customer service, elegant compartments with en-suite facilities and fine dining. One such example is The Golden Eagle that comprises three categories of cabins: Imperial Suite with a double bed (and a private guide in most destinations on the journey), Gold Cabin with a private bathroom and other facilities, and a Silver Cabin.

Is it safe to travel Trans-Siberian?

The Trans-Siberian railroad is safe for travelers. We advise you to choose a railway compartment with a locking door.

How many time zones will I visit in the Trans-Siberian tour?

Have a special railway tour request or want some tailor made changes?
Share your wishes with us!

The program is not published yet

Please, share your email address with us and we'll send it to you.